April 19, 2004 — Princeton, NJ — Minsk, Belarus — Sponsored by EPAM Systems, a team of students from Belarus (a former republic of the Soviet Union) became the third out of several thousand student teams from all over the world and won the gold medals in the World Finals of the 28th ACM International Collegiate Programming Contest held in Prague, Czech Republic, on March 31, 2004. This year 3,150 teams from 75 countries had taken part in regional contests with 73 teams from 31 countries competing in the finals in Prague. The Belarusian team included Viktoria Lebed, Ivan Metelsky, Maxim Osipov - all of them students of the Belarusian State University, EPAM's premier education partner.

Winning the third gold medal of the championship right after the teams from St. Petersburg Institute of Fine Mechanics and Optics and KTH-Royal Institute of Technology (Stockholm, Sweden), the Belarusian collegiate programmers left behind the teams from Massachusetts Institute of Technology (5th place) and Harvard University (9th place). The gold medals of the teams from Belarus and St.Petersburg, the 4th and 8th places of two more Russian teams at the world's most prestigious university competition in computing sciences and engineering only confirm that the Soviet scientific and technical legacy should be taken into consideration both by the internal policy makers and foreign investors and entrepreneurs. 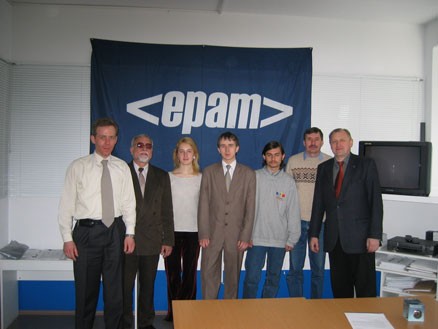 EPAM representatives congratulate the winners, their trainer and the faculty dean at EPAM's office in Minsk, Belarus.

EPAM has been the team's sponsor for several years in a row. Supporting gifted students has become not only part of the company's public relations but a necessity for EPAM itself: the position of one of the largest IT outsourcing service providers in Central and Eastern Europe and the customer base including SAP, Hyperion, Microsoft, BEA Systems, SUN Microsystems as well as such corporations as Colgate-Palmolive, Reuters Research, Samsung America, Halliburton, Deutsche Bank, and Mandalay Resort Group force EPAM to continuously look for new talented employees. Beside Byelorussian State University EPAM has official partner agreements and cooperates with 17 universities which boast strong IT-related and technical faculties with the total number of students enrolled in these universities approaching 152,200. The cooperation entails lecturing by EPAM specialists at IT faculties, training of promising students in the Training Center of EPAM Systems with the possibility of their further employment in EPAM, sponsorship of competitions for young programmers, joint R&D work, and exchange of information on the latest scientific, technical and technological achievements, publications and conferences.

EPAM acknowledges the potential of these relationships and fosters new partnerships. Sponsorship of ACM and similar contests, cooperation with leading R&D centers and universities help EPAM reach out to the next generation of IT talent and bring up IT leaders required for the mission-critical projects of the company's brand-name clients.

The Association for Computing Machinery (ACM) is a major force in advancing the skills of information technology professionals and students. ACM serves its global membership of 75,000 by delivering cutting edge technical information and transferring ideas from theory to practice.

The Belarusian State University (BSU) is the largest and most comprehensive of the higher education institutions in Belarus. Founded in 1921, BSU takes the lead in the national education system. The curriculum offers teaching in about 90 specialties to over 16,500 students. Over 2,000 lecturers and scientists work at 19 faculties and 172 departments within the University and its famous research institutes and national science centers.
www.bsu.by