EPAM Women in STEM: From Recruiting to an Engineering Career 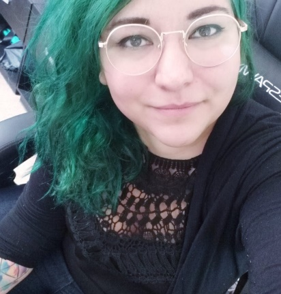 Meet Ana Elizondo, Junior Application Support Analyst at EPAM. Ana’s career path to becoming an engineer was unorthodox: She began her professional career as an IT recruiter and spent nine years in that space. Below, Ana shares the story of her career journey, and opens up about the challenges she faced along the way:

When I started as an IT recruiter, I only ever used a computer for surfing the internet or for doing homework. However, because I was recruiting IT professionals, I eventually learned about the software development life cycle, which I found to be very complex, yet extremely interesting.

After being vocal about my interest in programming, a software engineer I worked with at the time shared a programming book with me that opened with: “If a kid can program, why can’t you?” At first, I thought the author was joking, but after reading it, I began to make simple Python programs on my own. I was overcome with excitement about learning a new skill and happy that I was able to understand recruitment candidates more completely by developing my own IT knowledge.

To be candid, at that time I was not thinking about changing my career. I started to program because I found it fun: I enjoyed learning new skills and improving my knowledge of the candidates I recruited. Five years into my recruiting career, I decided to officially study engineering and further explore my options. At this point, I received a call from EPAM Mexico, known for their expertise in engineering, and I decided to join them as a recruiter.

Joining EPAM was the best decision I’ve ever made. I remember how excited I was to join, and I’ve been excited to go to work every day since. EPAMers are kind, proactive and always willing to share knowledge. I quickly became part of an algorithm club, even when I was a recruiter, and was warmly welcomed. The algorithm club helped me enhance my programming skills, so I began to join initiatives like EPAM’s eKids and Women Who Code. I even wrote a computer science book for children, in which I designed algorithm activities so kids could learn how computers think.

I was excelling in my career as a recruiter, but wanted to further explore my passion for engineering, so I decided to make the change. I was scared at first; engineering is mostly a male-dominated field and I spent most of my career working alongside women. It was very intimidating, but that didn’t stop me. What I learned was that it’s important to not only follow your dreams, but to confront your fears, be brave and challenge yourself.

So, I raised my hand and told a technical director at EPAM that I was open to exploring a technology career. He helped me decide which career path to choose and gave me the support I needed during the process. I was even set up with a mentorship program! Making the change, I received supportive messages inspiring me to keep going, but the truth was that changing my path from an administrative role to an engineering role was full of challenges.

I made mistakes, questioned my ability and became frustrated because I couldn´t find solutions to problems, but I never considered quitting, even when I felt defeated. I changed my way of thinking and made lists of my common errors so I could avoid them. I took my time and asked as many questions as I could. I found ways to grow and not to give up. The most important things I’ve learned are:

During this journey, which is far from over, I’ve learned that the ‘easy’ way is not for me. I want to continuously learn, challenge myself and keep fighting, even if the path is complicated. At the end of it, I know I’ll still be shining, because this is my story. If you’re curious about becoming an engineer, my advice is to go for it and write your story! You’ll be astounded at what you can accomplish.